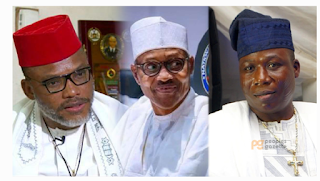 Four years ago now, I wrote this piece about the thing of collective guilt, and what it leads to. I think it’s more relevant now as Nigeria falls to pieces because of the bad leadership of Buhari.

I’ll talk, first in general terms, and then about the one that worries me.

Nigeria is heading towards an implosion. I think that sometime in October last year, we passed the point where it was not inevitable. However, I think that the worst effects of it can still be mitigated if, of course, we manage to maintain our exact current position until Buhari and his menagerie shuffle out of the revolving door of power. Unfortunately, given that they are doing everything to hang on to power even in the face of the unavoidable circumstance of Buhari himself departing, there is absolutely no guarantee that things won’t get worse, thus setting up the stage for really bad outcomes.

By its behaviour, the Buhari government has enabled the worst of Nigerians. And the worst of us across all ethnicities and religious groups are coming to the fore. This is where I’ll talk about my Igbo people: the behaviour of a particular herd of Igbo people online, the consistent abuse of those who do not agree with them, the taunts, the crassness, is turning so many people of other ethnic stocks against us and given our historical position, such a thing is unlikely to end well, for us.

Now let us build a quick scenario: Buhari and his crew leave power, and then with himself and his ethnic jingoists out of the way, the rest of Nigeria somehow finds a way to sing kumbaya and “sort of” heal. The bad blood that has built these last six years will still need an outlet. Who do you think will become the bad guys suddenly?

For my money, the logical bad guys will be those abrasive, in-your-face guys who happen to be in every corner of the country, and are thus easy to get to.

A few weeks back, Buhari said something: “they are scattered everywhere in the country, with many of them having properties among others. They are like a dot in a circle.”

The reaction online following that asinine statement was a lot of solidarity towards the Igbo from many people of non-Igbo stock. Based on the backlash that I am seeing, especially after the Obi Cubana charade, I fear that we have squandered that goodwill. I fear that we are doing ourselves no favours at all.

It was just over a generation ago that Chinua Achebe wrote, “that Nigerians will probably achieve consensus on no other matter than their common resentment of the Igbo.”

In the same 1984 work, The Trouble With Nigeria, noting that the Igbo grew economically fastest of any ethnic group in Nigeria between 1930 and 1950 (and did it again between 1970 and 1980), Achebe said of his people, “but this kind of success can carry a deadly penalty: the danger of hubris, overweening pride and thoughtlessness, which invites envy and hatred, or even worse, which can obsess the mind with material success and dispose it to all kinds of crude showiness.”

Not my words, but the words of Prof. Achebe, probably the greatest Igbo thinker ever.

What do we see in the behaviour of those who abuse everyone that doesn’t agree with them, including people from the Niger Delta, the South-West and the minority groups in the North?

History tends to be cyclical. We are setting ourselves up. My advice: Adịkwa na ka nwa nza li julu afọ, we je chere Chi ya aka mgba.

As for the rest of Nigeria, we are all guilty of assigning the madness of an individual to either his ethnic group or his creed. The terrible government of Muhammadu Buhari has made that instinct worse. But please note that the repeated failure to do the hard work of separating the perpetrators of evil from their ethnic or religious grouping has created a country filled with blood crying out for vengeance.

In 1966, a misguided action by men named Nzeogwu, Ifeajuna, Onwutuegwu, Anuforo, Okafor and Ademoyega, was hung on the entire ethnic group of most of the conspirators, even though the conspiracy was crushed by a man named Aguiyi-Ironsi. For that, millions of their fellow ethnic nationals, including the man who crushed the conspiracy, were killed over the next four years. In 1975, the town of Ugep, a Yakurr town in Cross River had a very unhappy Christmas because a soldier got drunk and went missing. In 1999, the town of Odi was wiped out because 12 policemen were killed by miscreants. And in 2015, the entire Shiite enclave at Gyelsu was wiped out because a few of them “touched the chest of General Tukur Buratai.”

This collective guilt that we partake in is what leads to such outcomes. But I have a final word: the world is becoming a more hostile place for all of us. We are seen as poor leeches who contribute nothing to the world but noise. The behaviours that you accuse ndi Igbo of, which some of us are guilty of I’ll admit, is the same way the world sees you, and worse. What you do to us, the world will do to you.

Nwanze is a partner at SBM Intelligence.