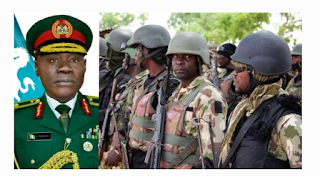 The army chief stated this while hosting a Sallah feast for troops deployed in Borno and Yobe.

“The Eid-el-Kabir festival brings a special reminder for us as it highlights the virtues of loyalty, obedience, and sacrifice, which are also the hallmark of professional soldiering,” he said.

Mr Yahaya further noted that Sallah had provided a unique opportunity to reflect and redouble efforts towards fulfilling constitutional roles of defeating adversaries and defending the territorial integrity of Nigeria.

The COAS said the army had lived up to expectations and would continue to remain focused on tackling security challenges in the country.

“I, therefore, wish to specifically recognise and appreciate the immense sacrifices of our troops in Operations Hadin Kai; Hadarin Daji, Thunder Strike, Whirl Stroke, and other operations.

“Let me use this opportunity to once again pay special tributes to our colleagues who have paid the supreme price in defence of our fatherland. May their gentle souls rest in peace, ameen,” said the army chief.

Mr Yahaya reiterated his commitment to promoting officers based on merit. But he warned that he would deal decisively with any soldiers displaying laziness and negligence.

“I shall continue to appreciate and applaud competence, diligence, and dedicated service. As I will reward excellence and achievements, I will not hesitate to punish indiscipline, indolence, negligence, and all untoward acts in line with my vision to have a professional Nigerian Army ready to accomplish (the) assigned mission within a joint environment in defence of Nigeria.”