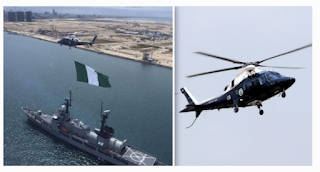 The Flag Officer Commanding Eastern Naval Command, Sanusi Ibrahim, disclosed this on Monday in a statement signed by the navy spokesman, Thomas Otuji.

The joint eastern and central naval commands had inaugurated the sea exercise in Port Harcourt. Mr Ibrahim noted that the sea exercise would also include anti-piracy operations, protection of oil facilities, and search and rescue operations.

“The exercise nicknamed ‘Beni Kekere’ meaning ‘water protection’ in Ijaw language aptly captures the primary responsibility of the NN, which is to protect Nigeria’s maritime environment against all threats.

“The exercise involves a multi-faceted deployment of the two commands’ assets both at sea and in the backwaters and is aimed at demonstrating our operational capabilities to securing our contiguous Areas of Responsibility. Our area of responsibility falls within the Niger Delta region in line with the Chief of Naval Staff Awwal Gambo’s Strategic Directive 2021,” he said.

According to the flag officer, the exercise will also present an opportunity for the navy to showcase its commitment to the regional security arrangement in the Gulf of Guinea, of which Nigeria is a major stakeholder.

“Nigeria’s maritime domain is dominant in the Gulf of Guinea with its enormous resources, and it remains strategic to our national security and development. We are also conscious that these resources have been persistently threatened by piracy, sea robbery, crude oil theft, and illegal bunkering, as well as illegal unreported and unregulated fishing, among other crimes.

“The Nigerian Navy and other security agencies have achieved landmark feats in curtailing these threats. The persistence of the perpetrators requires us to re-strategise in order to consistently deny them freedom of action,” he added.