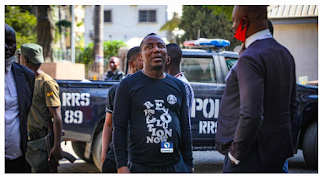 Sahara Reporters publisher Omoyele Sowore has been taken into custody after being brutalised by Nigerian security forces.

He said in a message to Peoples Gazette that police officers arrested him in Abuja and took him to a police station at Federal Secretariat, about 200 metres from the Abuja Division of the Federal High Court where Mr Kanu’s trial resumed on Monday morning.

“I have just been arrested by the Nigerian Police at the Federal High Court,” Mr Sowore said. “Subjected to beatings by police officers and taken to the Federal Secretariat police station.”

Nigerian security forces have intensified attacks on citizens as part of their deadly security measures towards Mr Kanu’s trial. Several journalists, lawyers and court observers were banned from entering the court premises on Monday.

The latest attack on Mr Sowore, a critical voice against the Buhari regime, came weeks after he was shot in the thigh by a female police officer while leading a protest against injustice in Abuja. He was later treated at a hospital in the nation’s capital but the officer that opened the fire received no disciplinary action.