Ogun: Many escape death as diesel tanker falls over - The Naija Weekly

Ogun: Many escape death as diesel tanker falls over 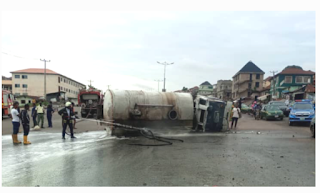 Many residents escaped death at Totoro area in Abeokuta metropolis on Sunday after a tanker with diesel fell at the roundabout spilling its content on the road.

The spokesman of the Ogun State Traffic Compliance and Enforcement Corps (TRACE), Babatunde Akinbiyi, said that the incident happened at 9:50 a.m.

The TRACE spokesman said the accident, which happened when residents were heading to their places of worship, was caused by brake failure.

He urged motorists and other road users to remain calm and cooperate with the traffic and safety managers at the scene of the incident.