Ooni has abobaku but we don’t kill them: Lowa Adimula of Ile-Ife - The Naija Weekly

Home News Ooni has abobaku but we don’t kill them: Lowa Adimula of Ile-Ife

Ooni has abobaku but we don’t kill them: Lowa Adimula of Ile-Ife 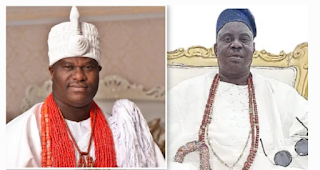 The Lowa Adimula of Ile-Ife, Adeyeye Adekola Adesiyan, says the claim that a deceased Ooni of Ife is buried alongside their closest aide, abobaku, is not true.

In an interview with BBC Yoruba on Thursday, Mr Adesiyan, who served as abobaku to Ooni Sijuwade Okunade for 14 years, said abobaku was Ooni’s aide-de-camp.

Shortly after Mr Okunade died in 2015, rumours that his abobaku would be buried alive with him became rife on social media, eliciting criticisms.

But explaining the abobaku role, Mr Adesiyan said an abobaku was the closest person to the Ife monarch, adding that no tradition or custom says the abobaku must be killed and buried alongside a dead Ooni.

“On sarun abobaku, it is not that the person is slaughtered or killed with charms traditionally whenever the Ooni dies. No. It is the love between the sarun abobaku and the Ooni. Because he is always with the Ooni, be it when the Ooni is eating, bathing or doing anything,” Mr Adesiyan said.

“The closest person to Ooni is sarun abobaku. He is the traditional ADC to the Ooni. But he is not killed or sacrificed whenever the Ooni dies, as rumoured. That’s how it is,” he added.

Mr Adesiyan further said though he was no longer the abobaku to Mr Okunade when he died in 2015 because he was promoted six years before the monarch’s demise, the demise of Mr Okunade left him in great shock.

“If I were still the sarun abobaku to him, it is not that I would be killed, but the shock of his demise would badly affect me because of the love I have for him. Even without being his abobaku, more than six years after his demise, I still remember him,” he added.