Ortom to Buhari: Arrest Miyetti Allah leaders like you did to Nnamdi Kanu - The Naija Weekly

Home News Ortom to Buhari: Arrest Miyetti Allah leaders like you did to Nnamdi Kanu

Ortom to Buhari: Arrest Miyetti Allah leaders like you did to Nnamdi Kanu 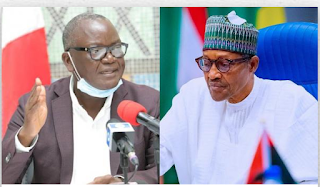 Following the arrest of Nnamdi Kanu, leader of the Indigenous Peoples of Biafra, (IPOB), the Benue State Governor, Samuel Ortom, has challenged the federal government to also arrest members of armed Fulani groups, who carry out attacks against farming communities in parts of the country.

Governor Ortom made the call in a statement to newsmen, Thursday evening.

Ortom said while he has no problem with the arrest of the Biafran leader, the Federal Government’s fight against terrorism and other crimes would only be seen to be unbiased if armed herders who have been killing innocent citizens are also apprehended.

He said President Muhammadu Buhari also admitted recently that herdsmen occupying the forests and terrorising the people are not Nigerians and wondered why no effort has been made to bring them to justice.

He called for the arrest of Miyetti Allah leaders who have vowed to inflict pain on Nigerians through sustained attacks, adding that justice must not only be said to be done but seen to have been done.

“Herders armed with sophisticated weapons attack and sometimes kill Livestock Guards and other security agents, and this is a situation which deserved a more decisive approach,” he said.

The Governor, however, reaffirmed that the day the Federal Government decides to end insecurity, the menace will become a thing of the past in the country.