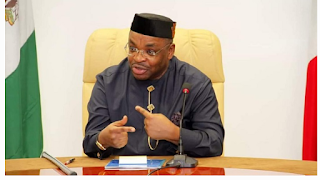 Amid disagreements by southern lawmakers, the House of Representatives followed the Senate lead to adopt three per cent derivation for oil-producing communities on Friday.

The southern Governors’ Forum had demanded allocation of five per cent derivation as initially proposed by the House.

Mr Emmanuel said “considering the devastating effects on members of our communities,” the percentage adopted by the National Assembly for the host communities is too small.

The governor stated this while fielding questions from newsmen in Minna on Saturday.

“The current three per cent is too little, considering the risks and hazards members of oil producing areas are subjected to.

“The fishermen can no longer earn a living because of oil spillage while the farmers cannot farm. There are numerous other challenges confronting members of oil communities,” Mr Emmanuel said.

The governor acknowledged that the National Assembly had performed their duties and that the southern governors could not take away their functions.

He however said the governors will study the PIB carefully and react to it.