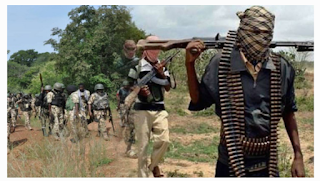 No fewer than seven soldiers were killed and five others sustained injuries when troops of Forward Operating Base (FOB) came in contact with armed bandits in Marke village, Zamfara State.

The soldiers who had laid in wait, stumbled on the large number of bandits in the said area and engaged them in gun battle.

The troops subsequently withdrew to Gadan Zaima in the Bukuyyum Local Government Area of the state for reorganisation.

However, a soldier was missing in action, while four Hilux, seven AK-47 rifles, one anti-aircraft gun, one PKT gun and two radios were also carted away, according to a wireless message seen by Peoples Gazette.

It said that troops have commenced search operation to locate the missing soldier, while those killed and wounded had been evacuated to 223 Battalion.

This comes barely two weeks after two soldiers were reportedly killed as troops repelled terrorists attack on a FOB at Bula Yobe in Borno State.

The incursion into FOB by the jihadist fighters was foiled by troops of 152 Task Force Battalion in conjunction with the Air Component of “Operation Hadin Kai” on Sunday, army spokesman Onyema Nwachukwu said in a statement.

Mr Nwachukwu further revealed that 12 terrorists were killed during the encounter. He disclosed that the attack by the insurgents was carried out by members of Boko Haram faction alongside Islamic State of West Africa Province (ISWAP).