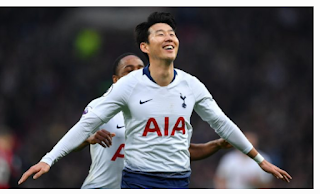 Son’s new contract would see him stay with the North London side till 2025, Tottenham announced in a statement on their website on Friday.

“We are delighted to announce that Heung-Min Son has signed a new four-year contract with the Club, which will run until 2025,” the statement said.

Since Son joined the English Premier League side in 2015, he has made 280 appearances in all competitions, made 64 assists, netting 107 goals.