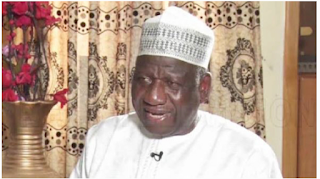 Sani Yabagi, the national chairman of Action Democratic Party (ADP) has said that governors of southern extraction are behaving like Sunday Igboho and Nnamdi Kanu in their gang up against President Muhammadu Buhari and entire northerners.

Messrs Igboho and Kanu are the respective leaders of agitations for Yoruba Nation and Biafra Republic.

Mr Igboho has been declared wanted after a raid on his home by State Security Service agents who killed two persons in the process last Thursday, while Mr Kanu has been remanded after he was repatriated back to Nigeria to face trial.

In a communiqué signed by Oluwarotimi Akeredolu, governor of Ondo State and Chairman, Southern Governors’ Forum, southern governors rejected the revenue sharing formula contained in the recently passed Petroleum Industry Bill, insisted on ban on open grazing and electronic transmission of election results and that southern region must produce the next president in 2023.

Speaking on Channels TV on Monday, Mr Yabagi, who was ADP’s presidential candidate in the 2019 election, however said the meeting of southern governors is a gang up against Northern Nigeria, adding that the governors are not different from agitators calling for the balkanisation of Nigeria.

“All the things listed in that communique from their meeting seems to be a kind of ganging up against the North,” Mr Yabagi said.

“When you look at the grazing issue, insecurity, the issue of politics of 2023, how can we have elected officials, governors for that matter, coming in this manner to emphasise things that divides us? Not talking about things that unites the country beats my imagination.”

“It is unfortunate that we don’t have governors today coming together on issues of principle. These governors are not anything better than Igboho or Kanu or any person’s not elected to protect the nation.

“By now we shouldn’t  be talking about these dichotomies that have nothing to do with good governance,” Mr Yabagi added.

He further said southern governors should be careful  not to scare northerners who control chunk of the vote that will determine whether power shifts to the south or remain in the North.

“I think we are getting it wrong and the earlier these governors wake up to their responsibilities of ensuring that this country remains one strong insolvable the better for everybody.

“The way they are going will scare the North and the North in fact controls the largest chunk of the vote they need to become the president of this country,” Mr Yabagi warned.