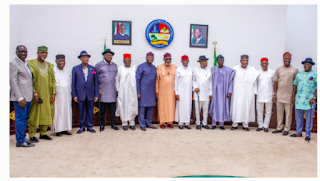 Seventeen governors from the southern states of Nigeria will meet on Monday, to continue their deliberation on the challenges of insecurity, open grazing/herdsmen invasion of farmlands, devolution of federal powers, among others.

The meeting would be in second since May where the governors made a big statement on issues of regional concern.

The meeting is in continuation of the last meeting’s 12-point resolution, which includes the banning of open grazing in all the states, Arise TV reports.

Sources had told the news medium that the governors will be looking at the gains of the last meeting and come up with their next move, in ensuring a better Southern Nigeria within the Nigerian nation.

The broadcaster quoted a source as saying, “You know the southern governors agreed that the progress of the nation requires that urgent and bold steps be taken towards the restructuring of the Nigerian federation leading to the devolution of power.

“They want inclusive government at the federal level, state police, a review of revenue allocation formula in favour of the sub-national governments, and creation of some other institutions, which will legitimately advance commitment to the practice of true federalism. Strategies are needed to actualise all these. This is why they are meeting again in Lagos.”

In May, the southern governors, in a four-hour meeting in Asaba, unanimously agreed to ban open grazing in all southern states, following the failure of President Muhammadu Buhari’s regime to find a lasting solution to killers herdsmen ravaging farms, kidnapping and killing farmers, and other residents.

An excerpt of the communique reads, “southern governors “observed that incursion of armed herders, criminals and bandits into the southern part of the country has presented a severe security challenge such that citizens are not able to live their normal lives, including pursuing various productive activities leading to a threat to food supply and general security.”

Members of the House of Representatives from the 17 southern states of the federation, also unanimously supported the resolutions of the governors.

Days after, Attorney General, Abubakar Malami described the decision of the governors as illegal, arguing that the governors’ ban on open grazing infringes on the freedom of Nigerians enshrined in the constitution.

Mr Malami advised the 17 southern governors to approach the National Assembly for the needed backing to effect the ban on open grazing.