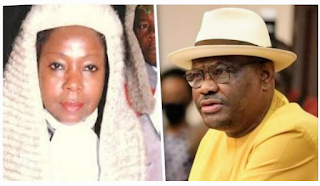 In April 2019, the gates of the federal and state courts in Rivers came under lock and key. It was Good Friday, a public holiday. A young woman who did not want to be identified because of the legal implication of her action told Peoples Gazette she obtained a fake affidavit for a change of name.

She admitted it was a fake court document, claiming she was pressured to swear an affidavit for SIM replacement and had forgotten that day was a public holiday.

The “registrar” on the affidavit was in real life a roadside typist who had acquired a fake stamp and forged affidavit number.

Godwin Yaakor, a senior registrar in Rivers judiciary, told Peoples Gazette that the government initiated an e-filing process for the judiciary to stop fraudulent court documents.

The automation system had made it easier for cases to be catalogued and migrated from manual to electronics.

During the launch of the e-filing system in Port Harcourt, Mr Asawo explained that the government had fully deployed it in all the courts.

“Lawyers can file their cases anywhere, and the Chief Judge can conveniently assign cases on their mobile phones,” he stated.

To sign up, a lawyer will register with their email address, fill in the requested information, upload a valid identification card and their seal. The user then gets an account activation email to verify and activate login credentials.

With the online platform, lawyers can file cases anywhere. According to Blessing Ayah, a front desk officer at the ICT department, registered lawyers can use the ICT centre computers and the internet for free.

Ms Ayah’s work is to guide and direct anyone who wants to file a case or obtain an affidavit but encounters difficulties or needs a guide to understand how the system works.

Lawyers said the process has made work easy for them in the state, as they do not have to queue in the bank anymore to pay for filing. They can pay through the website using their debit card, directly to the state government’s account.

During the recent nationwide judiciary workers’ strike, lawyers in Rivers filed cases and processed affidavits online. According to Ms Ayah, the cases already filed by lawyers were stamped and assigned to judges by the registrar online.

Ovye Affi, a barrister, had first thought the website would not work during the strike. But he tried it. Mr Affi said that when he filed a case got a response within two weeks that a judge had been assigned to his case.

Although Mbadinuju Akunesiobike did not file a case during the strike, he had earlier filed one sometime in March and, within 72 hours, a judge got back to him, requesting that the chief judge reassign the case to the appropriate jurisdiction.

“Before it could be assigned, the strike began. Now the strike is over, and we have a new judge, it took the judge few days to get used to the process,” Mr Akunesiobike said.

On July 7, 2021, the lawyer visited a court library to use the ICT centre to check for an update on his case and discovered that his case had been assigned to a judge.

Describing the automated filing process as convenient for users, he said registrars fond of demanding bribes from lawyers are now out of the way.

Although the electronic means of filing cases and obtaining affidavits have their merits, the system still has its shortcomings.

Electronic filing was convenient but expensive, admitted Mr Akunesiobike. The lawyer stated that he only had to pay N500 before the e-system. But now, a lawyer must pay an extra N500 for the service charge.

“The things that previously cost N2,000 now require an extra charge of N1,000 per filing. It is not good for business to bill clients high,” complained the lawyer.

Legal officers of security agencies in the state also use the e-filing system. An officer from the legal department of the State Security Service who pleaded for anonymity told The Gazette the recent online filing is compelling security agencies known for filing for free to now pay to have their cases treated.

“We are asked to pay N50 per page each time we want to scan a document. When you multiply it by the number of pages, the amount is too much. Now, this is in addition to the service charge,” the SSS agent pointed out.

When asked why they continue coming to the ICT centre when they could easily file from the office, the secret agent said, “The SSS usually prefers filing their case in court.”

Rivers government established the electronic filing system to generate revenue and curb corrupt practices in the judiciary. However, due to challenges with the process, some persons still patronise roadside typists in procuring fake affidavits.

A legal practitioner in the Rivers government’s employ said under anonymity, “Every filing costs N1,000 for service charge. Whereas, during the analogue period, one could file a case for free.”

The lawyer added, “Right now, I have been battling to file an affidavit for a client and not getting what I want. Sometimes if you do not meet the registrar to stamp it, they would not do it. You would then have to start again by printing the online affidavit and take the file to the assigned registrar as displayed on the website for signing.”

He urged the government to allow people to choose between manual and electronic filing systems.

A slow network is also a challenge users face. A lawyer, Royal Mba, wants the system upgraded for increased speed during filing.

“It is affecting the litigation and filing system. There was an incident when I went to court, only for the other party to say they did not receive the details of my filing,” the lawyer explained. “The judge had to adjourn the case. The technical team should upgrade the capacity so that e-filing will be easy. Generally, the idea is okay except for the delays.”

The Rivers has made progress in curbing fraud and corrupt practices in the judiciary. However, some touts who litter the ICT centre still take advantage of people unaware of the e-filing system.

Though there are displays of the e-filling process on court’s premises, many believe that repeated announcements and advertisements to showcase the importance of the system should be on public and private media outlets to save ignorant Nigerians from falling prey to fraudsters.

In the meantime, the public wants the government to stop the touts’ menace.

With the e-filing system, Rivers said it has set an example for other state governments. Other states willing to replicate the policy in their jurisdictions would likely learn from Rivers’ experience and avoid any shortcomings associated with the e-filing platform, lawyers said.