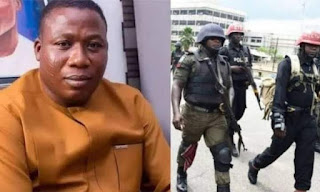 Yoruba nation fighter, Sunday Adeyemo popularly known as Sunday Igboho has debunked the rumor making the rounds that he was arrested at the Guru Maharaji area along Lagos-Ibadan Expressway on Friday night.

Igboho disclosed that he was not at the Guru Maharaji but in his house in Ibadan.

This was said in a video Friday evening by the Yoruba nation campaigner.

In the video, Igboho said, “Rumour has been circulating that I have been arrested at the Guru Maharaji. I am not at Guru Maharaji, I am in my house in Ibadan. Thank you very much.”

Also, the founder of Kingdom of Heaven on Earth Sat Guru Maharaj has debunked the report that Igboho was arrested in his temple located along Lagos-Ibadan expressway.

He said, “I am in my house in Lagos. Those speculating falsehood are mischief-makers whose heads need to be examined. I am not aware of such an arrest, nor I was arrested. No arrest made in my temple, so ignore such speculations.”

Recall that Igboho had vowed to hold a Yoruba mega rally in Lagos today.