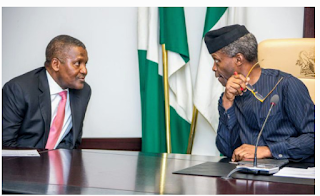 The Minister of Works and Housing, Babatunde Fashola, who disclosed this at the end of the council meeting on Wednesday, said the government awarded the contract under the federal government’s Roads Infrastructure Tax Credit policy.

“The second memorandum presented by the Ministry of Works and Housing was for the construction or the reconstruction, as the case may be, of five road projects in favour of Messrs Dangote Industries Limited, totalling 274.9 kilometres of federal roads, under the federal government Roads Infrastructure Tax Credit policy, which is one of our strategic partnerships with the private sector.

Mr Fashola further explained, “First of all, the award is consistent with our multiple funding options, which includes engagement with the private sector. So, this administration has revised it, expanded it, and has used it to construct roads like the Apapa Wharf Road, the Oworonsoki to Apapa, through Oshodi Road, by the same Dangote Group.

“The Obajana-Kabba Road, still the Dangote Group. The Bodo-Bonny bridges and road, which Council approved last week, through the NLNG.”

He further stated that the award was not unique to Dangote. But Dangote is expected to profit from the tax credit if the construction involves concrete roads because Dangote cement will be used.

“There was also interest by many other companies that are being reviewed,” disclosed the minister. “So, it’s not unique to Dangote. He’s the one who has applied, and we’ve been in this process. This is the next batch of roads that they are taking up. They invest their money, and then instead of when their taxes come due for payment, they net it off.”

According to him, the works and housing ministry evaluates the process, adding that “there’s a tax credit committee chaired by the finance minister because they keep an eye on how much tax giveaway (sic) in one year.”

He noted, “It’s the committee that then approves and says, ‘Go ahead. This is good. This is how much tax will allow per year, and if the company is satisfied, then we go to BPP and then come to FEC.”