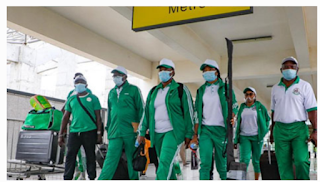 The first batch of the Nigerian contingent to the Tokyo Olympics has departed for the Games on Tuesday.

Minister of Youth and Sports Development, Sunday Dare, urged Team Nigeria to avoid doping and compete in a clean manner to win medals for Nigeria at the Tokyo Olympics, while bidding farewell to athletes.

“Our departure for the Games today is evidence that if we work in unison we can collectively achieve whatever we set our minds to as humans.

“I enjoin you to make the nation proud at the Games by competing clean and bringing glory to your fatherland,” he said.

Mr Dare said the federal government had committed a lot of resources to ensure adequate preparation that would make the athletes win medals.

He assured that plans had been concluded for President Muhammadu Buhari to also bid farewell to some of the athletes while unveiling the official Team Nigeria uniform.

“The president would formally unveil the official Team Nigeria uniform for the Games during the presentation of the contingent to his excellency,” he said.

He explained that Team Nigeria will be travelling to Kizarazu city in Japan for the pre-Games training camp in four batches.

The first batch that left for the Nnamdi Azikiwe International Airport, Abuja immediately after the ceremony comprised canoe, rowing and table tennis athletes, coaches and officials.

The second batch comprising athletics, taekwondo and wrestling will depart on July 13.

The third batch of gymnastics and badminton will leave on July 17, while the last batch comprising male and female basketball teams departs on July 19.

Earlier, the president of the Nigeria Olympic Committee, Habu Gumel, said 58 athletes had qualified so far for the Games, to be accompanied by 22 coaches in nine sports.

He stressed the need for the athletes to be good ambassadors of the country while respecting all the Covid-19 protocols at the Games.

“After years of training and competing, you have emerged as best of the best athletes worthy of representing Nigeria in the greatest sporting spectacle on planet earth.

“I have no doubt in my mind that you will be worthy ambassadors in Japan. You will excel to podium level for our national anthem to resonate at Tokyo,” Mr Gumel said.

The rescheduled Tokyo Olympics will hold from July 23 to August 8.