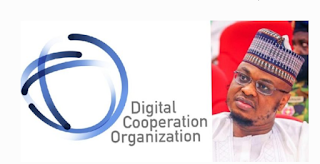 Isa Pantami, Nigeria’s communications minister whose dangerous religious and political views, including a declaration of support to Osama bin Laden, the Taliban and Al Qaeda, have continued to unsettle Nigerians, has dragged his secular country into an alliance of Islamic countries.

Mr Pantami signed Nigeria up for the membership of Digital Cooperation Organisation (DCO), a group that includes strictly Islamic countries. Mr Pantami did not throw the matter up for public debate in Nigeria, where a virtually equal number of Muslims and Christians would have properly looked at the implication of the country’s membership before taking a decision. The minister appeared to have on his own, presumably with the backing of President Muhammadu Buhari, whose dangerous religious and ethnic agenda has long been documented.

In a chain of key objectives listed on its website, DCO said its first aim was to collect and share data across the member countries towards digital economic prosperity.

The body said it aimed to optimise “policy and regulatory frameworks to expand cross-border data flows and digital trade among DCO members.” Other potential benefits of the group include a plan to “reduce the digital divide across the DCO” and also to “align approaches to engagement and negotiations with private sector actors.”

The DCO said the countries were brought together because of their common “vision, strategic goals, and shared values.”

But Mr Pantami’s intention has unsettled some Nigerians online, who said it was suspicious that a minister with a proven history of extremist views would seek to drag a secular Nigeria into an alliance of Muslim countries.

“I can’t recollect any public stakeholder consultation on this matter. No matter how hard you try to spin it, a minister with extremist antecedents signing Nigeria up for a group that comprises only Islamic countries is going to be viewed more about religion than the economy,” Amara Nwankpa, a policy expert based in Abuja, said on Twitter Wednesday morning.

Mr Pantami disclosed Nigeria’s intention to join the organisation in April, but the minister has provided little information to guide Nigerians on the benefits of the alliance.

Mr Pantami’s failure to elaborate might be traceable to his role as the custodian of Nigerian’s personal data. Since late 2020, the minister has been on an aggressive push to collect personal data of Nigerians, including their biometric information for telephone lines and a national identity card.

Mr Pantami continued his controversial campaign despite revelations months ago that he held extremist views that would make millions of citizens uncomfortable with having him at the helm of data collection. Excerpts of the minister’s past controversial sermons included his thirst for the blood of unbelievers, a campaign to drive Christian minorities from their ancestral lands in central Nigeria and his role at a meeting that debated assassination of a Christian governor in the Muslim-dominated northern region.

Mr Pantami also said he considered Osama bin Laden a better Muslim than himself in 2006, years after the infamous Al Qaeda leader masterminded the killing of over 3,000 Americans on September 11, 2001.

Mr Pantami denied being a fundamentalist, but did not recant his vicious views as a Muslim preacher in northern parts of the country between mid and late 2000s. Mr Buhari swiftly rallied behind him rejecting public pressure to sack the minister.

The minister did not return a request seeking comments about why he enlisted Nigeria in DCO. An email to DCO was not immediately returned Wednesday morning.