Trader shot dead in Ladipo market, Lagos state, to be laid to rest on Saturday, 24th July 2021 - The Naija Weekly 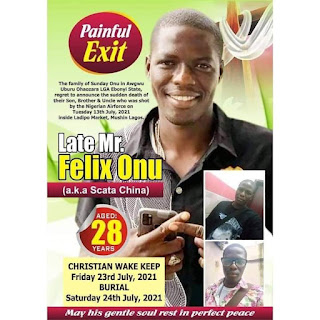 The funeral rites for Felix Onu, aka Scata China, has begun and he will be finally committed to mother earth tomorrow.

Felix, 28, was reportedly carrying his goods into his shop during the fracas between traders and military men in Ladipo market when a stray bullet hit him.

Friends mourning him on Facebook described him as a gentleman, whom lots of foreigners patronised because he was trustworthy.