Truck laden with diesel intercepted along Nigeria-Niger border in Katsina 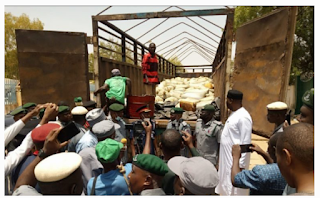 An articulated vehicle loaded with diesel in polythene bags has been impounded by the Nigeria Customs Services in Katsina. The truck was heading to an area along the Nigeria-Niger Republic border.

The Nigeria Customs Services (NCS) controller in charge of the Federal Operations Unit, Zone ‘B’ Kaduna, Albashir Hamisu, said that each bag contained 35 litres of diesel concealed in 200 sacks.

The vehicle was handed over to the vehicle to the Nigeria Security and Civil Defense Corps (NSCDC).

According to him, the vehicle was intercepted at the early hours of Wednesday along Batsari-Jibia road, while heading to Jibia Local Government, an area around the Nigerian-Niger border.

Describing the seizure as huge, Mr Hamisu said that if the perpetrators had escaped, it would have ended up in the wrong hands.

“You see, the importance of this arrest is that banditry is being promoted by this kind of illicit products.

“Everyday bandits are on their motorcycles and the bandits don’t come to the filling station to buy fuel.

“You will be surprised to see how they are filling their tanks every day to carry out their criminal activities.

“I am sure that NSCDC is very capable of investigating the matter and getting to its root; that is why we are handing it over to them.

“There is no alternative than for security agencies to work together because the environment does not suggest working alone,” he said.

In his response, the NSCDC commandant in Katsina, Mohammed Sanusi, commended the effort of the customs and assured of his continued support to the command in Katsina State.