Twitter Ban: ECOWAS Court adjourns to July 9 to consolidate suits by SERAP and others - The Naija Weekly

Home News Twitter Ban: ECOWAS Court adjourns to July 9 to consolidate suits by SERAP and others

Twitter Ban: ECOWAS Court adjourns to July 9 to consolidate suits by SERAP and others 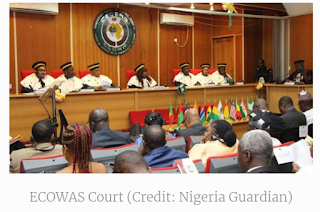 The ECOWAS Court adjourned its sitting to July 9, to allow it consolidate the various applications brought before the court on the ban of Twitter in Nigeria by the federal government.

The adjournment was made on Tuesday, over a virtual court sitting.

Legal representative for the federal government, Abdullahi Abubakar, moved to consolidate all the four applications before the court on the Twitter ban. He noted that his applications had been filed in court and made an oral application, supported by a seven paragraph affidavit and a written address.

Mr Abubakar asked the court to consolidate the hearing of the applications pending before it. This application got no opposition from other counsel.

Legal representation for SERAP, Femi Falana SAN, did not object to the application, stating that it would “afford the court the opportunity to give one judgment in the matters that were similar in nature and character.”

The Counsel to Media Rights Agenda, Mojirayo Ogunlaya, also had no objections to the application for consolidation.

The ECOWAS Court noted that parties involved in two cases, marked as ECW/CCJ/APP/24/21 and ECW/CCJ/APP/26/21, were absent from the proceedings and as such, may not make a decision in their absence.

The court adjourned to July 9 to enable it go over the proceedings once since the same parties are involved in all the applications.

SERAP had filed a lawsuit against the Buhari-led regime at the ECOWAS Court in Abuja over the government’s suspension of microblogging platform, Twitter. The civil society organisation had gained a ruling from the court, stopping the government from arresting Nigerians using Twitter.