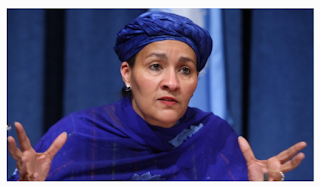 Inner City Press in a tweet on Tuesday disclosed that it was served a three weeks’ ban after its reporter inquired into the human rights violation of Sunday Igboho amongst and other developing rights issues.

“Inner City Press has asked: what are the comments and actions if any of SG Guterres and DSG @AminaJMohammed on that a court in #Benin has ordered that a #Nigeria leader being held in the country be moved to prison: Sunday Adeyemo, aka Sunday Igboho,” it added.

The U.S. based media also inquired into the rosewood scandal of 2017 that indicted Ms Mohammed while serving as Nigeria’s minister of environment.

In 2017, the second-highest-ranking official of the United Nations was at the centre of an illegal rosewood trade between Nigeria and China.

The Environmental Investigation Agency (EIA) reported how Ms Mohammed authorised the export of endangered timber, rosewood, to enrich her pocket, China despite an existing ban in her last days as Nigeria’s minister for environment.

Ms Muhammed denied all corruption allegations uncovered by the investigation, and the UN did not immediately take any disciplinary measures against her over the scandal.

Ms Mohammed who served as the country’s minister of environment under the Buhari regime between 2015  and 2016  has been accused of failing to use her position at the UN to prevail over her former principal who has continued to initiate anti-rights policies, constantly violating the rights of Nigerians. However, she has continued to back Mr Buhari’s anti-democratic policies.

On July 1, operatives of the Nigerian security forces invaded the residence of Yoruba secessionist Sunday Igboho in Ibadan, Oyo State, shot their way in and destroyed properties.

Mr Igboho became a subject if government interest after he moved against marauding Fulani herdsmen who have been fingered in several atrocities such as kidnappings, rape of women and destruction of farmlands in his native Ibarapaland in southwestern Oyo State.

A request for comments to a spokesperson for UN was not immediately returned.