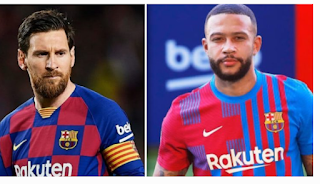 FC Barcelona officially presented striker Memphis Depay to the press on Thursday in an event at the Camp Nou Stadium.

The presentation happened two days after Depay arrived in Barcelona to put pen to paper on his new deal.

The Dutch international has joined Barca on a two-year deal from the French side Olympique Lyon and has the release clause on his contract set at €500 million.

Depay comes to Barcelona at the personal request of Barca coach Ronald Koeman, who has previously worked with him at the Dutch national team.

He is one of the most important of the club’s new arrivals, including Kun Aguero and Eric Garcia from Manchester City and defender Emerson Royale from Real Betis.

The club still has to confirm that star striker Lionel Messi has signed a new contract after his old deal expired at the end of June.

In the past few days, French international Antoine Griezmann has been linked with a possible return to Atletico Madrid as Barca look to lower their wage bill.

The move is to help the Spanish giants in meeting financial fair play requirements.