We need commonsense to lift 100 million Nigerians out of poverty: Osinbajo - The Naija Weekly

Home News We need commonsense to lift 100 million Nigerians out of poverty: Osinbajo

We need commonsense to lift 100 million Nigerians out of poverty: Osinbajo 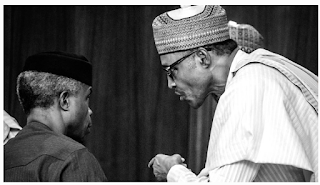 Mr Osinbajo, made this remark in Abuja on Friday at the inaugural meeting of the National Poverty Reduction with Growth Strategy Steering Committee held at the Presidential Villa.

The vice-president was appointed to head the poverty reduction committee by President Muhammadu Buhari in June.

Mr Osinbajo said beyond paper work, common sense is need to actualise Mr Buhari’s plan to lift 100 million Nigerians out of poverty in 10 years, adding that the government should focus on “commonsensical” things to actualise the plan.

“I really want us to approach this as much as possible, commonsensically, so that we are able to resolve all the issues and focus on the real progress,” Mr Osinbajo said.

“I want us to look beyond all of what we are going to be doing, there is going to be a considerable amount of paper work, but a lot of common sense is what grows economies.

“It’s what other countries have done, not really reinventing the wheel. So, I want us to focus on those commonsensical things, so that we can actually move forward.”

He added that Nigeria must learn from countries that have lifted their citizens out of poverty and adopt similar strategies to realise Mr Buhari’s promise.

“Countries that have managed to get out of poverty have created a lot of jobs through industries, and they have developed intentional strategies. We must look at what others have done, the smart things that other people have done, and adopt.

“We really have to think smartly about how we are funding agriculture,” said Mr Osinbajo.

“I think we really need to take a deep dive because governments have made several efforts at poverty alleviation but generally speaking, they have not yielded the sort of results they should yield, and I think it’s because there is a lot of focus on documentation and paper work and very little commonsense approaches,” he added.

In his Democracy Day speech on June 12, Mr Buhari claimed his regime has already lifted 10 million Nigerians out of poverty.

But, contrary to Mr Buhari’s claim, the World Bank report on June 15 said about seven million Nigerians dropped below poverty line due to increase in inflation in the country in 2020.