Wike to Buhari: Arrest Miyetti Allah, bandits now, like you did to Nnamdi Kanu - The Naija Weekly

Home News Wike to Buhari: Arrest Miyetti Allah, bandits now, like you did to Nnamdi Kanu

Wike to Buhari: Arrest Miyetti Allah, bandits now, like you did to Nnamdi Kanu 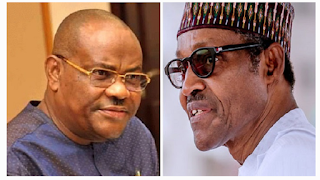 Mr Wike noted that despite the differences Rivers government had with Mr Kanu, the rule of law and due process must be followed in his arrest and prosecution.

The governor further urged the federal government to ensure all terrorists on its watchlist regardless of their ethnicity or religion are arrested and made to face the wrath of the law.

“We must not make hullabaloo about the prosecution of Nnamdi Kanu. I don’t agree with his principle. I have come out and said you cannot annex my state to be your own. But that does not mean that you will not allow the law to take its course,” Mr Wike said while speaking during a live television interview.

The Rivers State governor added, “You cannot say because Nnamdi Kanu is from a particular area, let us prosecute him. The same thing must apply to all other people, the bandits, Miyetti Allah.”

Mr Wike had recently justified the federal government for killing members of the Independent People of Biafra (IPOB), led by Mr Kanu, warning members to repent else they will die like vultures without heads.

The federal government in a letter to the Western Diplomats dated April 26, 2021, accused Kanu of orchestrating the killing of 60 persons and the destruction of property in 55 violent attacks across the South-East and South-South Zones in four months.

The Ohanaeze Ndigbo Worldwide, the apex Igbo socio-cultural organisation which represents the interests of southeasterners, is yet to issue a public statement on the re-arrest and re-arraignment of Nnamdi Kanu.

But, Kaduna State governor, Nasir El Rufai, has expressed delight over the arrest and repatriation of the separatist leader.

“I was very happy for two reasons. First the man was on trial and he jumped bail, that in itself is a crime and no legal system should accept that,” Mr El Rufai, a Fulani leader said.

Although Kenyan High Commissioner in Nigeria, Wilfred Machage, had denied his country’s involvement in the arrest of Mr Kanu, Ifeanyi Ejiofor, Mr Kanu’s attorney, insisted Kenyan police seized the IPOB leader while travelling through their international airport on June 18, detained and tortured him before handing him over to the Nigerian government.