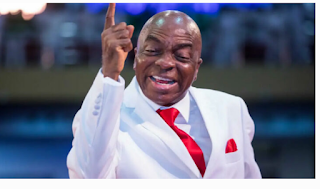 David Oyedepo, the General Overseer of Living Faith Church, also known as Winners Chapel, has justified the sacking of 40 pastors, saying they are failures.

“I learnt some fellows said, ‘You know, they are not bringing income, that is why they asked them to go.’ We asked you to go because you are unfruitful,” Mr Oyedepo said in a video of his recent sermon.

This comes days after reports surfaced online that the pastors were sacked over their inability to generate enough income.

“Consequent upon the recent performance reviews which revealed that your Church Growth Index falls below expectations, please, be informed that your services as a pastor-in-charge are no longer required from this commission with immediate effect,” a letter signed by the executive secretary of the church, Adebisi Aboluwade, dated June 25, 2021, stated.

Similarly, in a viral video, a man who identified himself as Godwin and claimed to be one of the pastors affected said he was sacked for the same reason.

Mr Godwin said he was invited alongside some other pastors to the state pastor’s office, where they were issued the letter.

“The church doesn’t operate at a loss,” the pastor claimed Winners Chapel disclosed when he demanded an explanation why he was fired.

Mr Godwin added, “They also told me that the total income that is being generated from my station should be able to cater for my welfare and accommodation. So as a result of low income, I’m hereby dismissed.”

“Unfruitful! Blatant failure. Doing what there? We have no patience with failure here,” the cleric asserted. “When we employed 7,000 people at a time, social media was dead. We have more employees in this organisation than in most of the states.”

Refuting claims Winners sacked for generating low revenue, the fiery preacher stated, “No one is owed a dime salary, and we don’t borrow. We don’t beg. Ask our bank whether we take overdraft. We are covenant-bound, working in the light of God’s Word, enjoying an open heaven.

“We have fully delivered the first phase of 1,000 plus buildings to the rural churches. None of those churches can generate that fund in the next 30 years. No, we are hunting after souls.”

He added, “Money? Nonsense. We have never lacked it, and yet we have never prayed for it. We are just simply obeying God, and he is backing up what he is asking us to do. Awesome God.

Mr Oyedepo further maintained that the pastors were unfruitful as they failed to win souls, which according to him, is the church’s principal assignment.

“We have never seen it ourselves. We just watched God doing it. The only criterion is, how many souls have they gotten there? Then, build for them. How many souls? How much money do they have?” he queried.