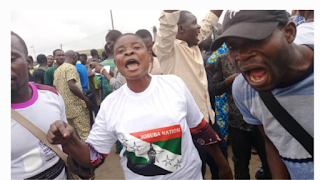 Large crowds of agitators turned up at the Lagos rally called by Yoruba separatist group, Ilana Omo Odua on Saturday in defiance of threats by the police and other security forces of the Nigerian government.

As early as 9:00 a.m., Peoples Gazette could see hundreds of protesters trooping to the Gani Fawehinmi Park in Ojota, Lagos, venue of the demonstrations.

The area is heavily guarded by officers of the Lagos police command and the military, armed to the teeth, The Gazette can report.

Unfazed by the presence of the security forces, men, women and youths decked in secessionist regalia, banners and placards continued to chant pro-secession mantras. 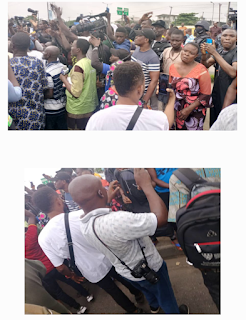 We can no longer tolerate the invasion of our farmlands and rape of our daughters. No going back,” a female protester told The Gazette at the venue.

“Oduduwa Nation- No going back.

Yoruba Nation agitator Sunday Igboho has been holding rallies across southwestern states for the past weeks but authorities sternly warned him against staging a protest in Lagos.

His residence in Ibadan was in the wee hours of Thursday invaded by state actors who killed two persons and arrested 12 others. Some properties were either destroyed or carted away as exhibits.

The State Security Service later declared Igboho wanted, alleging that he stockpiled assault weapons to cause insurrection against the Nigerian state.