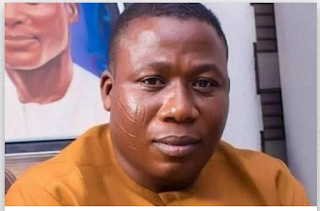 Yorubas in Diaspora has condemned the attack and invasion by department of state services (DSS) on Chief Sunday Adeyemo, popularly known as  Igboho’s residence which led to a protest on Friday at the Nigerian Embassy in United Kingdom

They condemned the invasion and attack on his residence, adding that Igboho is a peaceful man.

Some of the placards read: “Location 419.. #YorubaNationNow, “Yoruba Nation. No going back”, “Sunday Igboho is a man of the people”, “Oduduwa Nation must stand.”

A Pro-Yoruba Nation protester, Peter Oladele said, “We are here to inform the UK embassy that enough is enough. Look at the criminal atrocities committed by criminal herdsmen; we are not going to back down. Sunday Igboho is not a terrorist.”

Another protester Grace Dada said, “What did Igboho do to the federal government? Gumi is there patronising bandits, why didn’t they arrest him?

“They killed two persons, we want them to release those arrested. We are not criminal, Yorubas are peaceful people. Since Igboho has been doing the rally, it has been peaceful.”