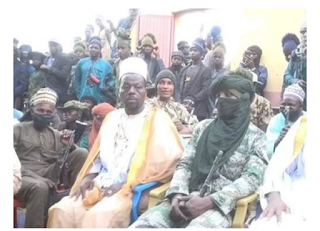 One of the notorious bandits terrorising the Northwest, Kachalla Turji, has let loose his gang on several villages in Shinkafi Local Government Area of Zamfara State, furious that his father was arrested by security agents.

At the last count yesterday, the gang had abducted up to 150 villagers and travellers.

In neighbouring Kaduna State, the Atyap Community Development Association (ACDA) alleged that 42 of its people were killed and seven wounded by suspected herders in the latest attacks in several communities in Zangon Kataf Local Government Area.

Torji, who met with renowned Islamic cleric, Sheikh Ahmad Gumi, in February, demanded his father’s immediate release to enable him celebrate the Eid el Kabir with his family.

He reportedly vowed to abduct as many people as possible and keep them away from observing the Eid with their families if his own father was not released.

He wondered why the old man was arrested in the first instance.

The gang has laid siege to such villages as Kurya, Keta, Kware, Badarawa, Marisuwa and Maberaya.

Several travellers have also been abducted on the Gusau-Sokoto Road.

Residents of neighbouring villages are already in fear of what may befall them from the bandits.

During the February meeting with Gumi in Makkai forest, Turji had said neither him nor his men were afraid of death.

He accused government of underrating and reneging on the promises made to him and other bandits.

“This is how Boko Haram started. Nigeria has underestimated us and the problem,” he told Gumi.

He said his gang had in its possession loads of arms it could use to paralyse the state.

Counting the losses of its people at a press conference in Kaduna yesterday, the Atyap Community Development Association (ACDA) said 42 of their kinsmen were killed, seven wounded and 338 houses set ablaze in the latest attacks in several communities in Zangon Kataf Local Government Area.

Eight cars, 13 motorcycles, generators, food and domestic items were also either looted or razed in what the association labeled an onslaught against Atyap Chiefdom.

President of the association, Samuel T. Achie, asked the Kaduna State government to be alive to its responsibility by putting an immediate end to the “condemnable killings”.

The culprits, Achie added, should be fished out and brought to justice.

He recalled that not too long ago, the Fulani and Atyap communities signed a peace pact which both sides tried to respect.

He wondered where the provocation that sparked the latest violence came from.

“Other valuables were not left out as eight cars, 13 motorcycles, generators, food and domestic items were either looted or consumed by fire.

“Our revered places of worship were not spared as seven churches and their pastorium were razed.

“Among the houses razed by the militia are the family compound of our paramount ruler, His Royal Highness Sir Dominic Yahaya in Magamiya, and also the Abuyab family compound of retired Maj-Gen. Shekari Biliyock, a former commandant of the Nigeria-African Peace Keeping Arm, the ECOMOG.

“The entire Atyap Nation seems to be at a loss as to these senseless killings by the Fulani militia, as we have bent over to implement the decisions of the peace accord reached with the parties involved.

“The question is: what else were we supposed to do that was not done? It seems apparent that these attacks are being sponsored with larger motives than meet the eye.”

Continuing, he said: “It is a well-known fact the world over that crises are not won on the battlefield but at the round table through discussions that could lead to amicable resolution of the crisis with the parties determined to bring an end to it.

“The Commander in Chief of the Federal Republic of Nigeria once said that anybody found in possession of deadly arms be shot at sight. But as I am talking to you, Fulani militias still graze in Atyap land with AK47 hung on their shoulders.

“There is no place in all the areas attacked that has a distance of more than 10 to 15 minute drive from one security checkpoint to the other. It is not only lives and houses that were destroyed, but crops and places of worship inclusive.

“Our people are known to be purely peasant farmers, but at this season of farming have to abandon their farms for fear of being killed.

“All schools in the area are closed down, hence our children can no longer go to school, thereby creating a humanitarian crisis for all the displaced people in the land, which in turn creates an urgent need for internally displaced persons (IDP) camps to cater for those that have been left at the mercy of the weather both in rain and sunshine without any roof on their heads since the renewed persistent attacks.

“These whole thing looks like the Fulani militias want to grab and occupy our land. The Atyap people are law-abiding citizens who have been loyal to all successive governments to date and wonder why we should be left alone to carry our cross now.

“Based on these, we ask that government provide more troops, humanitarian relief materials and a peaceful atmosphere for all, else we will be left with no other option than to protect ourselves using all legal means.”