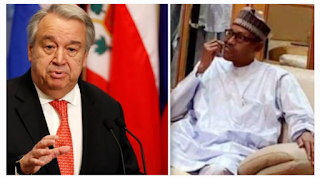 Stéphane Dujarric, the spokesman for the UN secretary-general, disclosed this in a briefing at the UN headquarters on Tuesday in New York.

“A quick note from our humanitarian colleagues in Nigeria. Our humanitarian colleagues in Nigeria tell us that we, along with aid organisations in the country, have formed a task force to respond to increasing food insecurity in the northeast part of Nigeria,” said the UN spokesman. “The task force is working with the government to implement a comprehensive plan to address food security, nutrition, health, protection, water, sanitation, and hygiene.”

The UN stated that the plan needed $250 million to help the hardest-to-reach people to receive food. The secretary-general had said over $1 billion would be needed to implement the Humanitarian Response Plan in northern Nigeria.

According to him, only one-third of the fund has been raised. Mr Guterres, who spoke through his deputy spokesman, Farhan Haq, said sustained funding would be needed to avert the food crisis in the zone.

“Our humanitarian colleagues warned that without sustained funding, millions of people in Borno, Adamawa, and Yobe states, North-East Nigeria will struggle to feed themselves,” said Mr Haq.

He explained that millions of people in the three states would struggle to feed themselves during the lean season due to conflict, COVID-19, high food prices, and climate change effects.

According to him, an estimated 4.4 million people, including internally displaced people, are expected to face critical food shortages, with 775,000 people being at extreme risk of catastrophic food insecurity.

“This is the worst outlook in four years. The humanitarian community is working with the government and local authorities to scale up the distribution of food in high-risk areas. But a surge in violence targeting aid workers and assets has made this difficult,” he added. “Our colleagues tell us that 8.7 million people in Nigeria need urgent assistance, including 2.2 million displaced people.”