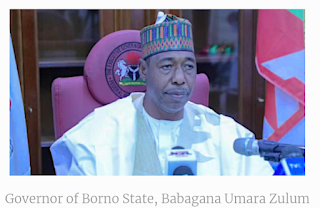 Babagana Zulum, governor of Borno has facilitated the enrolment of 5,361 orphans who lost their parents to the Boko Haram insurgency in Monguno Local Government Area.

This is contained in a statement on Thursday by Zulum’s special adviser on communications and strategy, Isa Gusau.

Mr Zulum and some members of his cabinet who participated in the two-day exercise said, “5,361 orphans aged from seven to 13 were given free uniforms, writing materials and free meals in schools.

“They were registered in the presence of their guardians who gave their biographic details, including places of displacement and indigenous local government.

“The 5,361 orphans are part of over 50,000 children either orphaned by Boko Haram or with parents and relations missing as a result of attacks on several communities by Boko Haram since 2009,” Mr Gusau said.

The governor also announced plans to engage Islamic teachers to teach guardians and other adults who are willing to learn in adult literacy class.