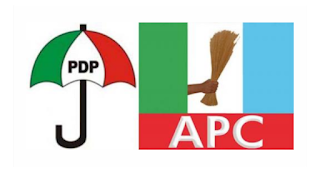 Internal crises are festering within the ruling All Progressives Congress (APC) and the main opposition Peoples Democratic Party (PDP).

Leaders of the two dominant political parties are at the centre of the turmoil.

Three justices, led by Justice Mary Odili, submitted that it is illegal for a sitting governor to hold another office simultaneously, citing Section 180 of the 1999 Constitution.

Akeredolu won the judgment by a narrow 4-3.

Many party stalwarts demanded that Buni should step down so that the party will not sink into “judicial jeopardy.”

The call become more strident at the weekend.

In the PDP, the governors have decided to meet next week to determine the fate of the Uche Secondus-led National Working Committee (NWC).

A source said the August 9 meeting may decide on bringing the December elective party convention forward to October to kick the NWC earlier than their end of tenure.

The PDP governors, who met in Bauchi last week, decided against undemocratic process being suggested by Wike to get Secondus out.

They also came up with some solutions to lower the brewing tension in the party ahead of 2023.

All the options will be considered at the August 9 meeting in Abuja.

A governor, who spoke in confidence, said at the weekend:  “Since there is division in the party on the fate of Secondus and his team, we are working on a middle of the road approach to keep the party intact.

“One of the options is the likelihood of bringing the National Convention forward by one or two months. We are thinking of holding it either in October or early November. Statutorily, the tenure of the NWC ends in December.

“The governors resolved to meet on August 9 to decide the exit date  of Secondus and NWC. The decision will then be communicated to all organs of the party.”

The anti-Secondus campaign has heightened in the last few days with a plot to use some peripheral NWC members, especially some of those serving as deputies to national officers, to pass a vote of no confidence on Secondus.

“We know that some people are floating a cash-for-sack deal against Secondus and the NWC but  they cannot succeed.

“If the NWC is sacked before its tenure ends, there will be anarchy in the party,” a member of the party executive said.

While writing off the NWC, WIke had said: ”An opposition party ought to be united, to work, to take over the affairs of government, because people are waiting for this opportunity, but the current leadership of NWC is not prepared for that. Rather, what they have done is to constitute some people to sow a seed of discord among governors for their own selfish interest. And that will boomerang; that will consume them.

“Yes. If you ask me as a member of PDP, am I ready to support PDP to take over, yes. But, if you ask me currently as it is, is the leadership of the party willing for us to harvest this opportunity for a change, I will say no.

“The present NWC is not interested or doing anything to take over the rein of government in 2023.”