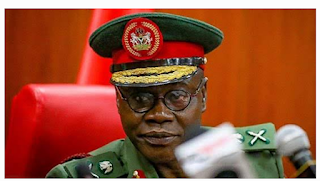 Nigeria’s Chief of Army Staff Lt.-Gen. Farouk Yahaya has again vowed to deal “decisively” with bandits, UGM and Boko Haram terrorists with his repositioning of the army.

Mr Yahaya gave the assurance in a statement by the Director, Army Public Relations, Brig.-Gen. Onyema Nwachukwu, on Thursday in Abuja.

The army chief spoke at the second Senior Command and Leadership Seminar in Kaduna, stating that the army will be better positioned to deal decisively with all adversaries behind the threats to the country’s internal security.

He further stated that training would improve the capacity of the army to checkmate the security challenges currently bedevilling the country.

He charged General Officers Commanding (GOCs) and brigade commanders to devise multidimensional, multidisciplinary and multifaceted approaches to defeat all adversaries and challenges. The service chief urged the senior officers to make utmost use of the opportunities offered by the seminar.

The GOC 1 Division in Kaduna, Maj.-Gen. Kabiru Mukhtar, noted that the seminar was a clear indication of the premium placed on quality leadership in the army by Mr Yahaya.

Mr Mukhtar noted that contemporary threats and the operating environment demanded innovative leadership and competence from commanders. According to him, operations under his division have yielded successes leading to a marked decline in security incidents in its “Area of Responsibility (AoR).”

He attributed the achievements to the concerted efforts of the troops and sister security agencies under the guidance of the chief of army staff.