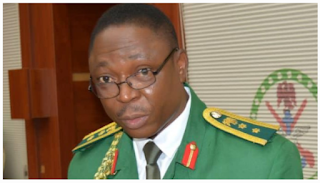 Army spokesman, Brigadier-General Onyema Nwachukwu, in a statement on Friday, said the suspect was arrested at Bayamari village in Geidam Local Government Area of Yobe.

Mr Nwachukwu said the suspect was nabbed by the vigilant troops with a total of 38 (50Kg) bags of Urea following a tip off.

He said that the urea fertilizer has been banned by the federal government because of its usage in the manufacture of Improvised Explosive Devices (IED) by terrorists.

According to him, the suspect is currently helping investigators with useful information.

“Troops of Operation Hadin Kai have been commended for their vigilance and swift response in arresting the suspect.

“They are also encouraged not to allow any form of distraction from the marauding terrorists, whose ranks have suffered acute manpower depletion as a result of ongoing kinetic and non kinetic operations conducted by troops.

“Law-abiding people of North-East Nigeria are assured of the Chief of Army Staff’s determination to finally exterminate the Boko Haram/Islamic State West Africa Province criminals from their hideouts,” he said.

Mr Nwachukwu, however, urged the people to continue to avail the troops with actionable information that would enhance the execution of the ongoing counter insurgency operations in the region.