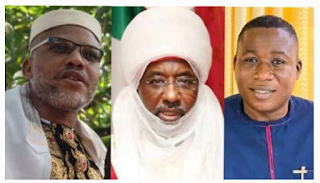 He described them as making ignorant demands.

“I hope that my story and the story of many of us here is one that we will use to continue stressing that those who say they want to break up this country do not know what they are talking about,” Mr Sanusi added. “We have to keep this country together, and if we complain about it, it is because we love Nigeria, and hopefully, we will not just complain.”

Mr Sanusi stated this at the unveiling of his book ‘For the Good of The Nation’ on Tuesday in Lagos.

The book, a collection of essays and perspectives, was unveiled to mark his 60th birthday and raise funds for girl-child education.

Mr Kanu has been clamouring for the Republic of Biafra amid claims that successive governments at the centre marginalise Igbos. On the other hand, Igboho, now in the custody of the Benin Republic authorities, has been railing against President Muhammadu Buhari regime’s alleged plot to let Fulani herders take over Yorubaland, among other claims.

“Those who say they want to break up this country do not know what they are talking about,” the deposed emir of Kano.

He acknowledged that it would be difficult to make Nigeria great, urging Nigerians to be united.

Despite repeated agitations and protests against marginalisation, institutionalised nepotism, and rights violations by many Nigerians, Mr Sanusi claimed that he “honestly do not know what you are looking for seeking the country to secede.”

The ex-CBN governor also told Nigerians to stop looking up to the government to “solve all our problems.”

He pointed out that over-relying on crude oil money could ruin the country.

“We have already made many (sacrifices). But if we don’t make those sacrifices now to set the fiscal position of government in order so that we are not relying on excessive oil, we are placing the future of this country in jeopardy,” he said.