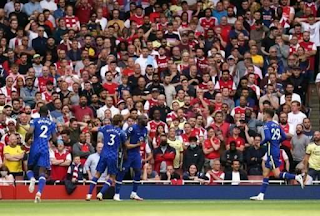 Romelu Lukaku scored on his second Chelsea debut as the club’s record signing inspired a 2-0 win at troubled Arsenal, while Harry Kane made his first appearance for Tottenham this season in a 1-0 victory against Wolves.

In Sunday’s other game, Mason Greenwood salvaged a 1-1 draw for Manchester United at Southampton.

Lukaku has rejoined Chelsea from Italian champions Inter Milan for £98 million ($133 million) and the Belgian striker made an immediate repayment on that huge investment in the London derby at the Emirates Stadium.

The 28-year-old spent three years at Chelsea between 2011 and 2014, but rarely featured and never scored before being sold to Everton.

Lukaku, who endured a difficult spell at Manchester United before joining Inter, took just 15 minutes to showcase his power and predatory instincts.

Holding off Pablo Mari, Lukaku kept the Chelsea attack going before shrugging aside the Arsenal defender as he surged into the six-yard box to tap in Reece James’ cross.

James scored Chelsea’s second himself with a superb strike into the far corner after Mason Mount picked out the unmarked defender inside the Arsenal area.

European champions Chelsea have made a flawless start to their title challenge, winning successive games without conceding a goal.

Lacklustre Arsenal were booed off at half-time and Mikel Arteta’s team are pointless and goalless after following their limp loss at Brentford with a second defeat.