Buhari has a new vision for Niger Delta: Osinbajo - The Naija Weekly

Buhari has a new vision for Niger Delta: Osinbajo 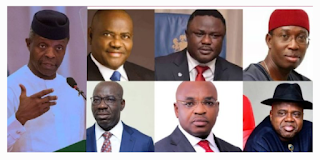 The vice president was represented at the ceremony by the senior special assistant to the president on Niger Delta Affairs, Office of the Vice President, Edobor Iyamu.

“In 2017, following my tour of the Niger Delta, which involved extensive consultations with key stakeholders in the region, the new vision for the Niger Delta was birthed in response to the various challenges which had been plaguing our people,” stated Mr Osinbajo. “The objective of this new vision is to ensure that the people of the region benefit maximally from their wealth, through promoting infrastructural developments, environmental remediation, and local content development.”

As part of the quest to expand economic opportunities in the region, he noted that Mr Buhari’s regime promoted investments in modular refineries.

“The objective of this initiative is to address our present energy demands and empower the Niger Delta people through promoting local content,” he added.

Mr Osinbajo stated that while there were several modular refineries at different stages of completion in the region, three had been completed.

Also, he mentioned that Mr Buhari’s regime started the ongoing remediation in Ogoni under the recommendations of UNEP.

“It is important to note that the Ogoni clean-up is the first of its kind in the history of the Niger Delta. Indeed, this is the first time the federal government is directly involved in remediation activities within the region,” said Mr Osinbajo. “We are equally committed to expanding infrastructure in the region. This includes the ongoing construction work on the 34-km Bonny-Bodo road/bridge, which has been abandoned for decades.”