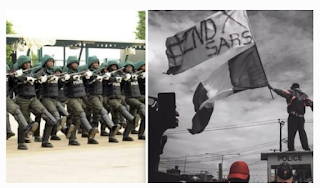 Mr Dingyadi further stated that the ministry had signed a contract with the Poly of China to supply police anti-riot equipment.

He explained that the equipment, when supplied, would further enhance the operations of the police to quell civil unrest. Mr Buhari’s regime has also provided police officers with more protective helmets, drugs, and bullet-proof vests.

Mr Dingyadi disclosed this on Tuesday as he praised the federal government’s Police Trust Fund (PTF), which he noted had started yielding desired results.

“Few days ago, I was at the Force Headquarters for the pre-commissioning inspection of more than 200 vehicles, bullet-proof vest, protective helmets, drugs, and medical equipment procured by PTF,” said the minister at the annual ministerial media briefing in Abuja. “The fund has also procured arms and ammunition, riot control equipment and combat equipment for the Police Special Weapon and Tactical Squad (SWAT).”

He added that “several other intervention projects being embarked upon by the trust fund in its 2021 budget will soon be unfolded.”

The minister further claimed that Mr Buhari’s regime’s interventions had enhanced the war against violent crimes by terrorist groups and bandits in the country.

According to him, available crime statistics presented by security agencies showed a decline in the activities of Boko Haram, bandits, and kidnappers even though wanton killing and kidnapping continue across the country with the latest deadly attack by bandits on the Nigerian Defence Academy in Kaduna.

He explained that the reinvigoration of ‘Operation Puff Adder’ in the North-West and the “ongoing operation restore peace” in the South-East will yield positive results by restoring peace and stability “for economic development and safety of lives and properties in the areas.”

Nigeria’s North-West states, mostly Zamfara, Kaduna, Kebbi, and Katsina, have borne the violent brunt of bandits. Lawmakers in Mr Buhari’s home state wept openly during a plenary about residents’ helplessness in the face of violent attacks.