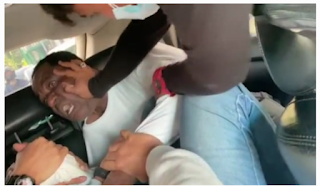 President Muhammadu Buhari’s regime has told the Indonesian government to punish its officials who assaulted a Nigerian diplomat in the Asian country.

Minister of Foreign Affairs Geoffrey Onyeama disclosed that Mr Buhari’s regime had demanded the sanctioning of the Indonesian officials who assaulted the Nigerian diplomat in Jakarta.

Mr Onyeama told journalists on Tuesday in Abuja after summoning the Indonesian ambassador to Nigeria, Usra Harahap, to express the displeasure of the federal government.

The minister added that Nigeria had also recalled its ambassador to Indonesia, Usman Ogah, for consultations, including a review of bilateral relations.

The Nigerian diplomat was seen assaulted by Indonesian immigration officials in a video that went viral on social media.

The video sparked outrage from Nigerians as Mr Onyeama immediately summoned the Indonesian ambassador on Monday. According to him, the foreign affairs ministry immediately contacted the Nigerian ambassador in Indonesia when it noticed the video of the diplomat restrained by his neck in a moving car on social media.

The minister further stated that the ambassador also confirmed that the assault occurred during a round-up by Indonesian immigration officials while searching for irregular and illegal migrants in the country.

“The first thing the ministry did was to request that the ambassador submits to the ministry a full and comprehensive report of what happened,” said Mr Onyeama. “And to immediately reach the Ministry of Foreign Affairs of Indonesia to lodge a formal and a strong complaint against the actions of the immigration officers as their action violated the Vienna Convention.”

While further stressing that the action was a clear breach of the Vienna Convention, Mr Onyeama said it was “an act of egregious international delinquency.”

Mr Onyeama added that the foreign affairs ministry was taking necessary steps to assure Nigerians that the government would defend the interest of Nigeria and its citizens anywhere in the world.

“We call on you all to be patient and calm as we get fully to the bottom of this for our ambassador to arrive and for consultations to take place, and we assure you that an appropriate response will be forthcoming,” said Mr Onyeama.