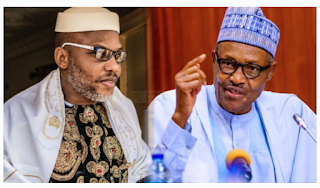 The Pentecostal Fellowship of Nigeria in Anambra has called on President Muhammadu Buhari’s regime to engage agitators in the country in a peaceful dialogue, noting that using force against them will worsen secession threats.

Moses Ezedebego, the PFN chairman, made the call while addressing reporters on Tuesday in Amawbia, Awka South local government area.

Mr Ezedebego stated that “ideological dialogue“ would solve challenges faced by agitators in place of “tactful neglect,“ which, according to him, “always leaves traces of bickering.’’

“Marginalisation, suppression, or coercive actions in addressing national issues would never yield positive results. We need actions that would unify the nation. All sides need to be heard for total peace to be achieved,” he warned.

He called on the government to listen to all sides of the agitations and resolve all issues ranging from unemployment, insecurity, social and economic problems that had remained unresolved.

The bishop disclosed that the PFN would hold its annual prayer rally on September 17, where all the 179 communities of the state would be represented. Mr Ezedebego said the PFN president, Wale Oke, would lead the prayer session.

“We are going to pray for the unity and progress of the nation and a special session of prayers for Anambra because of its governorship election slated for November 6,” he noted. “We need an impeccable candidate to govern the affairs of the state after the present governor completes his tenure in March 2022.”

He also announced the inauguration of the “PFN for Good Governance“ committee headed by Amaechi Nwachukwu to help galvanise and ensure good representation of the people in the governance of the state.

He explained that the leadership of the PFN commended the Anambra government for its purposeful leadership and urged it not to relent on its democratic leadership.