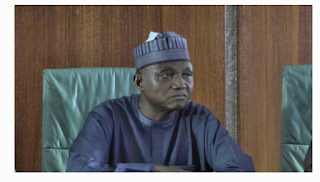 The spokesperson made this statement in an interview with BBC Pidgin on Saturday when explaining that Mr Buhari’s changing of political parties cannot be likened to Benue State governor Samuel Ortom’s move from one party to another.

However, contrary to Mr Shehu’s claim that Mr Buhari “saved the country’s democracy”, instead the regime has been notorious for gross human rights abuses, extra judicial killing of protesters and massive clamp down on the media, considered by many as the worst in Nigeria’s history.

Nigerians have also witnessed cases of killing of protesters across the country as the police and army continue to open live rounds on protesting citizens since Mr Buhari assumed office in 2015.

In 2015, shortly after Mr Buhari came into power, over 348 members of Shiites Islamic group were massacred and buried in a mass grave by the Nigerian military.

Amnesty International had in 2016 reported how the Nigerian military extra judicially killed at least 150 peaceful pro-Biafra protesters in the South-East part of the country.

A nationwide protest against years of police brutality and extra judicial killings, christened #EndSARS, ended on a tragic note when on the night of October 20, 2020, the military opened live rounds on young Nigerians gathered at the Lekki Toll Gate in Lagos.