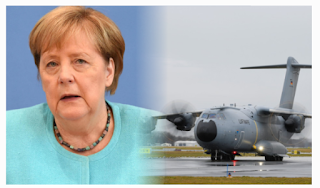 A German military transport plane with 114 seating capacity, which left Kabul late on Monday carrying the first contingent of evacuees, was only able to fly seven people out of the Afghan capital, a Foreign Ministry spokesman said on Tuesday.

Heiko Maas, the ministry spokesperson said, the Airbus A400M was officially designed for 114 passengers, though it was understood that up to 150 people could be transported on it during the evacuation operation.

Mr Maas blamed the chaotic circumstances at the airport and regular exchanges of fire at the access point, adding that there was no guarantee that further German nationals and other persons to be evacuated would be allowed access to the airport at all without Bundeswehr protection.

The aircraft also had to leave the airport after a very short period on the ground, and it had not been safe to bring evacuees into the airport before the arrival of the plane.

The German military had only been able to bring paratroopers from its rapid deployment division who were specially trained for evacuation operations to Kabul with this first aircraft.

“With the support of the Bundeswehr forces now arriving in Kabul, we are working under high pressure to make this possible for the first evacuation groups in the course of the next few hours,’’ the spokesman said.

“We have a very confusing, dangerous, complex situation at the airport, especially because of the crowds,’’ the conservative politician said.