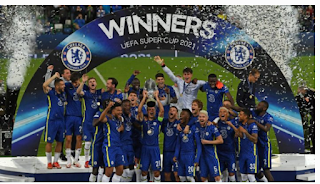 Moroccan midfielder Hakim Ziyech gave the Blues an early lead in the 27th minutes, ending the first half with Chelsea leading Villarreal by a lone goal.

But the Spanish side levelled up in the 73rd minute as Gérard Moreno fired in an equaliser that extended the game into the extra time.

Extra time ended with both clubs not being able to find the back of the net. However, Thomas Tuchel’s side edged out Villarreal vial penalty shootout.

Kepa Arrizabalaga, who came in to replace Eduard Mendy in the extra time, made two saves to help Chelsea defeat Villarreal 6-5.

Chelsea will start their 2021/2022 English Premiere League campaign against Crystal Palace on August 14.