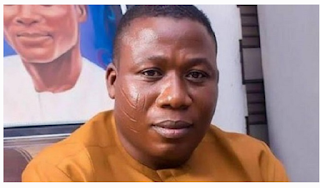 The State Security Service and Nigeria’s attorney general Abubakar Malami have been ordered by a court not to arrest and block the bank accounts of Sunday ‘Igboho’ Adeyemo.

Specifically, Justice Ladiran Akintola of the Ibadan high court on Wednesday after listening to the motion ex parte filed by Mr Igboho’s counsel, Yomi Aliyu, restrained the secret police and Mr Malami from arresting and harassing the Yoruba Nation activist.

Mr Aliyu had moved the ex parte motion urging the court to grant his application. The other respondents in the suit were the SSS director in Oyo and the AGF.

None of the respondents was in court or represented by a counsel.

Mr Aliyu informed the court that Mr Igboho’s life was being threatened after the violent invasion of his house on July 1 by SSS agents.

The counsel also told the court that Mr Igboho’s property was damaged and one of his relatives killed by the security agents during the invasion.

He tendered exhibits and a written address to support his motion.

Delivering his ruling, Mr Akintola said he was satisfied with the explanation provided by Mr Igboho’s counsel, backed up by evidence.

The judge restrained the respondents, their agents, or any other security agents acting on their behalf from killing, arresting, detaining, or harassing Mr Igboho.

He also restrained the respondents from interfering with Mr Igboho’s fundamental rights to life, personal liberty, freedom of movement, and enjoyment of his property without fear of an invasion of his home.

The judge further restrained the SSS and the attorney general from blocking Mr Igboho’s account in any bank or placing on it a no-debit.

It also ordered them to lift any restrictions imposed on Mr Igboho’s bank accounts, pending the hearing and determination of the suit.

He, however, adjourned the case until August 18 for a hearing of the originating summon.