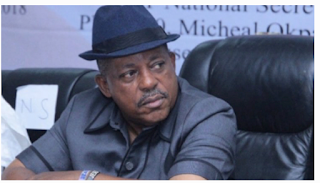 The national chairman of the Peoples Democratic Party (PDP), Uche Secondus, has been suspended by a state high court sitting in Rivers on Monday.

The court case, instituted by Ibeawuchi Ernest Alex, Dennis Nina Amadi, Emmanuel Stephen and Umezirike Onucha as claimants/applicants against Mr Secondus and the PDP as first and second defendants, sought amongst other prayers an order of interim injunction against Mr Secondus from parading himself as the national chairman of the PDP.

The court judgment cited by the Peoples Gazette was given by Justice O. Gbasam at the State High Court in Degema local government area of Rivers state.

Continuing, Mr Gbasam in the document restrained Mr Secondus from “calling, attending or presiding over any meeting of the 2nd Defendant or any Committee of the 2nd Defendants at Ward, Local Government or State Level… pending the hearing and determination of the Motion on Notice for Interlocutory Injunction.”

Mr Gbasam also approved the suspension of Secondus as a member of the PDP pending the hearing and determination of motion on notice for interlocutory injunction.

The judge also granted the aggrieved parties, Ibeawuchi Ernest Alex, Dennis Nna Amadi, Emmanuel Stephen and Umezirike Onucha, leave to serve all orders made by the court and all subsequent processes to Mr Secondus’ address in Port Harcourt, Rivers state.