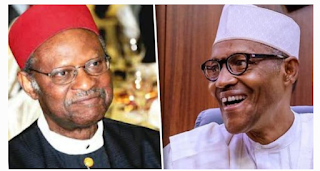 Emeka Anyaoku, former Commonwealth secretary-general and elder statesman, has warned that the deterioration of the worsening insecurity and other social-political crises under President Muhammadu Buhari’s regime is pushing Nigeria “to the brink of national disaster.”

Mr Anyaoku raised the alarm at the 10th edition of the Emeka Anyaoku Lecture series on Good Governance, organised in his honour in Awka on Thursday.

“Developments in this country are pushing Nigeria to the brink of national disaster,” he stated. Mr Anyaoku decried the country’s degeneration into international irrelevance and sliding into the ranks of poverty-stricken nations.

He noted that he had to break his over 10 years’ resolve to stay away from public glare, as Nigeria was fast drifting away.

The octogenarian added that the level of deterioration had robbed Nigeria of the desired respect and the much-needed sense of belonging by its citizens.

He pointed out that kidnappers and bandits should be called “terrorists and nothing more.”

In 2021 alone, hundreds of people, including schoolchildren, have been kidnapped for ransom. Hundreds of others have been killed across the country, especially in the North. There has also been state-sponsored violence against South-East and South-West separatist agitators.

Mr Anyaoku also expressed worry over the recent assault on a Nigerian diplomat in Indonesia, noting that such a development indicated the ignominy with which the rest of the world now treat Nigeria.

In his speech, Governor Willie Obiano said of Mr Anyaoku, “We have also come under the powerful influence of the ideals and philosophies that formed the foundations of his entire life’s work and remarkable career that changed the interface between nation-states.

Also speaking, Donald Duke, former governor of Cross River, described Mr Anyaoku as a gift from the Obosi people to Anambra, Nigeria, and the world.

Kingsley Moghalu, the guest lecturer, called on Nigerian leaders to sit up and deliver good governance to the people.

Mr Moughalu, a former deputy governor of the Central Bank of Nigeria, stated that leadership, not politics, was the main driver of a nation’s progress.