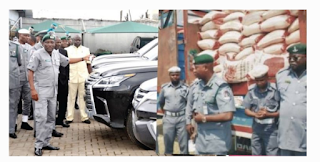 The Nigeria Customs Service (NCS) has impounded 13 vehicles, 314 bags of imported rice, and other goods, valued at more than N60 million, in Katsina.

Customs said the products were impounded between July 8 and August 3.

The acting Controller of Customs in the state, Dalha Wada, disclosed this on Tuesday in Kaduna at a press briefing. According to Mr Wada, the command in the period under review intercepted a Lexus Saloon 2011 model with Duty Paid Value (DPV) of N3.6 million, Toyota Corolla 2015 with DPV of more than N7 million.

The customs boss in Katsina put the total value of the vehicles intercepted at more than N42.1 million. Mr Wada noted that the command also impounded 314 50kg bags of parboiled foreign rice, worth over N7.5 million, 227 jerrycans of vegetable oil of 25 litre each, with DPV of N5.4 million and 178 cartons of imported spaghetti valued at N961,000.

“Meanwhile, we also intercepted four motorcycles worth N240,000, bags of animal feed worth N2feed0 and also 14 jerrycans of petroleum products with a DPV of N61,600,” he added.