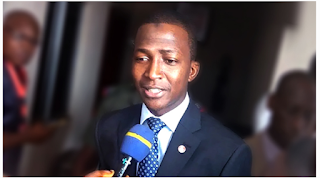 Mr Bawa himself faces a slew of unresolved allegations of corruption which Peoples Gazette first exposed in September.

Mr Bawa made the call on Wednesday at a sensitisation lecture, ‘EFCC and the Role of the Youths in Curbing Cybercrime’.

The lecture was organised by the National Youth Service Corps (NYSC) at the Orientation Camp, Yikpata, Kwara.

Mr Bawa, represented by Ayodele Babatunde heading the agency’s public affairs department at its Ilorin zonal office, said that youths were critical stakeholders in the fight against corruption.

The EFCC boss described the youths as future leaders that should imbibe the culture of hard work, excellence, integrity and shun all forms of economic and financial crimes.

He urged the corps members to be exemplary in their conduct.

“We are inviting you to lend a hand in helping us build a society where there is respect for law and order and where impunity is a thing of the past,” said Mr Bawa. “We urge you when you see something, say something and don’t stop there, please do something.”

Mr Bawa encouraged the corps members not to engage in internet fraud or any other forms of corruption, which could jeopardise their careers.

“There is no shortcut to wealth and fame, as the act of criminality might deliver wealth in the short term, but ultimately, it leads to misery,” the EFCC boss advised.

He described as worrisome 50 youths arrested in a single raid by operatives of the anti-corruption agency.

He noted that a corruption-free Nigeria was achievable if all stakeholders were ready to join the fight against corruption.

Before he was appointed the EFCC chair, The Gazette found how Mr Bawa was summoned to the EFCC for selling over 240 confiscated trucks to his cronies in action, following which he was arrested and detained at the EFCC headquarters for several days.

As further punishment, he was sent to the EFCC training academy by former acting chairman Ibrahim Magu, now been driven out of office following corruption charges of his own.