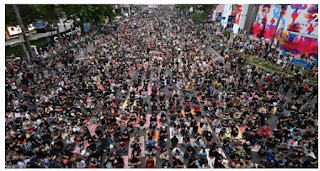 Clashes had erupted in the streets of Bangkok as protesters rally against the Thai government’s Coronavirus response, leading to the wounding of several police officers and the arrest of dozens of demonstrators.

Despite a ban on public gatherings, hundreds of people participated in demonstrations on Tuesday and Wednesday, according to tallies by the Bangkok Post.

The crowd calling for Prime Minister Prayut Chan-o-cha to resign set a police vehicle alight and threw fireworks and incendiary devices at officers, who fired rubber bullets and tear gas.

On Thursday, the police said more than 60 people were arrested over the two days, including around a dozen minors, adding that at least 11 officers were injured.

Frustration was mounting over the financial costs of the strict coronavirus lockdown in many parts of the country and Thailand’s sluggish vaccination campaign.

So far, only 6.5 per cent of the South-East Asian country population has been fully vaccinated.

Many receive the vaccine from the Chinese manufacturer Sinovac, which studies suggest has more limited effectiveness than others on the market.

The number of new infections every day was increasing, especially in Bangkok. On Thursday, the country saw a record of more than 22,700 new cases.

Thailand got through the pandemic lightly last year but has been battling a heavy wave since April.

In 2020, tens of thousands of people staged pro-democracy demonstrations, demanding a new constitution and reforms to the monarchy.

But those protests subsided starting late last year, as coronavirus cases rose and authorities cracked down harder against activists.