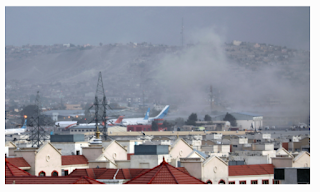 The U.S. government is worried about reports that its latest airstrike targeting ISIS-K in Kabul killed children.

The U.S. military said it had carried out an airstrike in the Afghan capital on Sunday to avert an “imminent” threat to Kabul airport from a local offshoot of the Islamic State terrorist militia.

A drone hit a car belonging to the terrorist group called Islamic State Khorasan, or ISIS-K, according to the U.S. military.

The strike came as U.S. President Joe Biden warned of an “extremely dangerous” situation in Kabul as the U.S. was preparing to pull out its remaining troops from the airport.

The U.S. military initially said there were no indications of civilian casualties but later said it was aware of reported civilian deaths and was looking into them.

“We know that there were substantial and powerful subsequent explosions resulting from the destruction of the vehicle, indicating a large amount of explosive material inside that may have caused additional casualties.

“It is unclear what may have happened, and we are investigating further. We will be deeply saddened by any potential loss of innocent life,” U.S. Central Command spokesman Bill Urban said.

Two vehicles and parts of the house were destroyed. It was not immediately clear if the casualties might have been caused by the U.S. airstrike rather than a mortar shell.

The airport was also located in the 15th police district. CNN reported that nine members of one family were killed in the strike, including six children.

The situation in Kabul remained volatile after ISIS-K claimed responsibility for Thursday’s airport bombing that killed dozens of people, including 13 U.S. soldiers.

The U.S. Secretary of State, Antony Blinken, told NBC that it was “not likely” that the U.S. would have any diplomatic representation in Afghanistan from September onwards.

Mr Biden’s national security adviser, Jake Sullivan, told CBS that the current plan was not to have an embassy in Kabul.

Mr Blinken stressed, however, that the U.S. would help people leave Afghanistan beyond September.