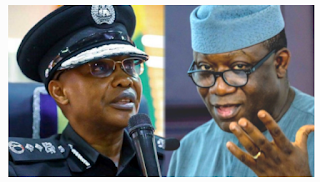 Two persons abducted on Friday evening along Ayetoro-Ekiti and Ewu-Ekiti in Ilejemeje local government area have regained their freedom after paying a ransom.

They were held captive for four days.

The kidnappers had earlier contacted relatives of the victims, demanding N50 million before their release.

Olusegun Erinle, a friend of the abducted, confirmed the release of the people after paying the ransom. Mr Erinle, however, declined to disclose the amount paid.

The kidnap victims had gone to Ewu-Ekiti for the burial of Florence Tuyole Erinle, mother of Olusegun Erinle, a former lawmaker in Ekiti.

It was gathered that the kidnappers released the two victims on Tuesday night at about 7:50 p.m in Ikun-Ekiti, Moba local government area.

They were driven to the heart of the town, Ikun-Ekiti, after which they went to the palace of the Onikun of Ikun-Ekiti, where the traditional ruler received them.

When contacted, the police spokesman in Ekiti command, Sunday Abutu, confirmed the release of the victims.

Mr Abutu stated that the police would probe the circumstances surrounding their release.

Mr Erinle, a member of the Ekiti House of Assembly from 2011 to 2015, shortly after the two were kidnapped, told journalists in Ado-Ekiti on Saturday that the abductors had reached out to them, demanding ransom.

The abducted persons were whisked away to a forest after the driver of an SUV with registration number LAGOS- KRD 264 GV was shot dead.